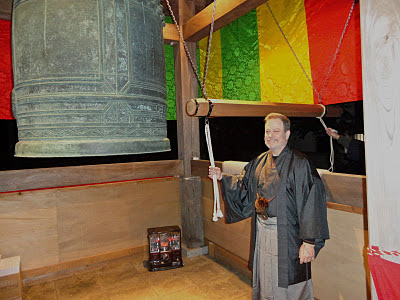 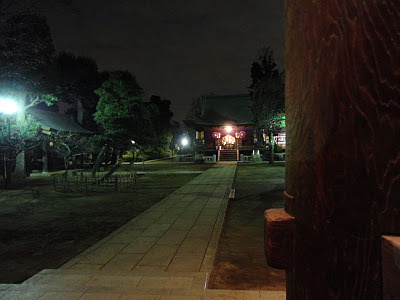 I had some very satisfying experiences during this holiday season. On New Year's eve, I went to the temple Enyuji for the 108 bell strikes. It is pretty common for temples to ring their bells 108 times on the last night of the year (it is called Joya no Kane in Japanese), but they have various ways of carrying it out. At Enyuji, they hand out 108 tickets to the first 108 individuals or groups (up to four people with one ticket). I put on my kimono (Oshima tsumugi) and hakama and headed over to the temple a bit before 10:00 PM, since the tickets would be handed out starting at 10:30. I splurged on a taxi to get there (walking would be nearly 30 minutes) and when I got there, the line was already pretty long. Of course, there was no way to tell how many groups--there were lots of families there, with kids running around and so on. But after waiting 20 minutes or so the line started moving quickly and I got my ticket.

It was fairly chilly--in the low 40s or high 30s F. So, I put lots of heat packs (those sand-filled things that heat up through slow oxidation) on my legs and back. I wore very thick underwear--top and bottom--giving a very filled-out look to my kimono. I also wore a thick woolen coat, called 'manto' a word borrowed from French. Because it doesn't have sleeves, it works well with a kimono. In place of sleeves, there is a kind of cape-thing over the shoulders. It buttons up snugly to the neck, and the material is like melton, so it is pretty warm. But it is easy to get cold just standing around. The bell ringing was supposed to start at 11:30 so I had some more time to kill. I just walked around the temple grounds and took lots of pictures. The temple buildings were still closed, and they are not heated anyway. Finally, the priest, Oka-san, came out and did the first ring. He remained standing in the bell tower the whole time, and he was just wearing his normal priest outfit with no overcoat of any kind. Maybe he was using heat packs too. There were at least three assistants for the bell ringing--probably lay volunteers. One guy took the ticket, and he was also available to take a picture for those who brought cameras. Another guy did miscellaneous work like checking the bell after each ring. Another assistant was holding the back of the log-like ringer, adding power and control for those that needed it. I took a few pix of people ringing, and then I got in line. When it was my turn, one of the assistants held my coat and another one took my picture. The standard way to ring the bell is to pull the ringer back once lightly, then back a bit more strongly on the second swing. On the third swing, pull back hard and BONNGGG! Every person then received a gift from the temple. This year and last year, the gift was a set of large, colorful chopsticks for cooking or serving. I have gotten chopsticks from other temples at New Year's, so maybe there is some tradition about this.

After my ring, I heard the 12:00 bells pealing from a nearby Catholic church. They just did one riff right at midnight. The temple bell gonged about once every minute or two, so it took probably an hour and a half or two hours. I didn't stick around long after I finished, but I decided to walk home. I went past the Catholic (Salesian, actually) church, which was having midnight mass that night. Also, that church is famous as the location of the wedding of Seiko Matsuda, a very famous pop singer.

About halfway home, I passed through Himonya Park, which has a big pond in the middle. I remembered that there is a shrine of the goddess Benzaiten (often shortened to Benten) on an island in the middle of the pond. Her shrines are often on islands (or hills). She is the goddess of performing arts--she is often portrayed playing the biwa. I crossed the arched bridge to the tiny island, then tossed a coin in the box, rattled the shaker/bell, clapped and bowed. Then, someone gave me an ofuda, a small sacred board. It had the name of the shrine, nothing that it was a branch of the famous Itsukushima shrine in Hiroshima. Someone had prepared cups of amazake, a sweet hot drink made from sake lees. A few people were standing around a small fire in a can. As I sipped my warming drink, I could still hear the bell of Enyuji.

Email ThisBlogThis!Share to TwitterShare to FacebookShare to Pinterest
Labels: enyuji, joya no kane 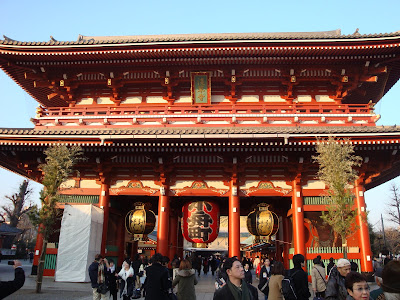 On January 1, I was invited to a small party starting at 3:00. Most people in Japan don't mind starting their drinking early in the day, if it is a special occasion. I went to the Asakusa area early, so see if I could also pray at the famous temple of Kannon, Sensoji. Last year, I waited in line about two hours, shuffling slowly down the wide path to the temple. I didn't have that much time, so I tried an alternative. First of all, it was very hard to get around, because it was so crowded. The main streets were blocked to cars--very nice. However, for the main path to the temple, the police blocked off the cross streets and just allowed people to cross at intervals, like a traffic signal. This was to prevent people from jumping the line. But it resulted in some delays and crowding. I couldn't believe that in the midst of all these people, most of whom were visiting the temple, some Christian group had set up big loudspeakers with audio of stuff from the Bible and like that. I saw the same group in front of Shibuya station earlier. I thought it was fine there, especially around Christmas, maybe they could attract some interest. But I felt a bit annoyed that they were adding a dissonant note to the scene at a large and famous Buddhist temple. Anyway. Whatever.

My tactic was to skirt around the far side of the temple, aiming for an area to the left of the main hall. This area was recently rebuilt, with some new temples, and some very old ones restored. The Yogodo has maybe eight Buddhas, with each one corresponding to one (or two) of the years of the Chinese zodiac. I was born in the year of the tiger, so my Buddha is Bodhisattva Koukuuzou. On my way to the Yogodo, I went through a street of down-home pubs, most with open fronts, making it fun to look inside. Many people were already celebrating with sake. Some shops had a barrel of sake right on the street, selling individual cups to passersby. I resisted. I also passed through some retro shopping streets, and two old-fashioned theaters where a kind of traditional vaudeville is performed. I could hear the amplified music playing inside the famous Mokubakan theater. There is also a small retro amusement park in the area, which added screams of roller coaster riders to the sonic environment. When I got to the Yogodo, I was able to walk right in and offer a candle to Koukuuzou. Then, I retraced my steps to get to my friend's place. He is not a sake drinker, so we had beer, wine and awamori. His wife had home-made traditional New Year food, including mochi with soy sauce and nori. We spent nearly seven hours eating and drinking, also watching some videos. I got home a bit before midnight. 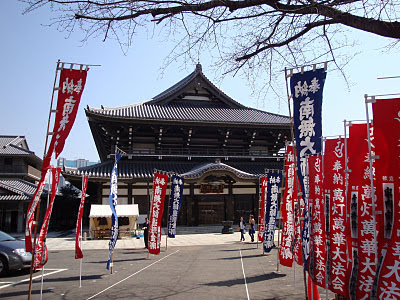 On January 3, I went to the Koyasan Tokyo Betsuin, the Tokyo branch temple of Koyasan Shingon esoteric Buddhism. They have had ceremonies at 10:00 AM and 2:00 PM for the past three days. So I dropped into the 2:00 ceremony today, to see the goma ceremony, when a fire is built in a special altar to invoke the power of Fudo Myo O, the unmoveable god of light, also known as Acala. The temple has a hard floor with chairs and a tatami area closer to the altar. As I was sitting in a chair waiting, a priest came out and invited everyone to move up to the tatami area. I thought maybe I could see better from there, so I moved.

Before the start of the ceremony, a very loud bell was rung as a signal. Then, a procession of four priest moved into the temple, with the first priest ringing a hand-held bell. Three of the priests were wearing the usual Shingon-style kesa, but one was wearing a brown robe that looked similar to robes that southeast Asian monks wear. The chief priest sat at a square altar right in front of the statue of Kukai Kobo Daishi. There was another square altar just behind that. The extra altar had a kind of canopy over it, and this is where the fire was built. I don't know if the canopy was a ritual necessity or maybe a way to control the smoke. Another priest hit a large drum and the fourth priest rang the large bell. Actually, several bells of various sizes were rung during the ceremony. After some invocational prayers, one priest took a microphone to encourage everyone to join in reciting the Heart Sutra. We recited it three times--I didn't know it was ever recited more than once. As the flames grew higher, one of the priests invited us to make incense offerings, noting that we might want to think of any special wishes or prayers while making the offering. Then, we started reciting the mantra of Fudo Myo O. That went on for a while, with the pace gradually speeding up until it was pretty frenzied, accompanied by the large drum. Then there was another mantra, one I couldn't identify, and another one that sounded like the mantra of Shakyamuni, but different from the one I know. All through this, the priests were passing ritual tablets through the flames and also adding more materials to the fire. Then, we were invited to join in the Gohogo, the invocation of Kobo Daishi. The ceremony ended after a few more prayers, and then the priests recessed, again led with a hand bell. Finally, they brought out the tablets that had been passed through the flames to present them to believers who had made special offerings.

There were three or four large casks of sake off to one side, with ladles and paper cups. I was hoping...but for some reason, they didn't offer me any! I don't know who got to drink that. But it certainly was a satisfying ceremony. I will see if I get my wish!