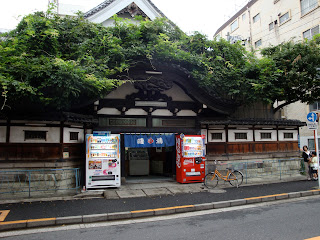 For most people in Japan, a quick shower is often just not good enough.  Gotta have a long, hot soak in a deep tub up to the neck.  This is pretty much the rule in Japan, where people have been enthusiastic bathers for many centuries.  In the early days, only the elite could actually afford bathing facilities, so public baths became well established.  Early on, the system was: wash thoroughly outside the tub, then enter the communal tub for soaking, warming and relaxing.

I like getting clean as much as anyone else, but the idea of soaking with strangers doesn't appeal to most Americans.  When I first came to Japan, so many years ago, I rented a tiny room with no bath, so I had to make a daily trip to the local sento--public bath.  The first night I arrived, I was so tired, I just went right to bed.  The next day, I was ready to get clean, but going to the sento for the first time was pretty daunting.  A French guy living across the hall offered to go and show me the ropes.

The first task is to choose the right entrance, for men or women.  Usually, these are notated with kanji--and I was completely at a loss.  However, Daniel showed me which one was the men's.  Before entering, you remove your shoes and put them in a shoe locker.  The building was a traditional one, with a high coffered ceiling.  This space was divided by a wall that was well over head height, although it did not go all the way to the ceiling.  There was an elevated desk, kind of like a pulpit, near the doorways, where one person could keep an eye on both the women's and men's areas.  This is also where you pay the entrance fee.  I was surprised to find a woman on duty there.  In the locker area, there was a block of lockers about chest height, so I was able to hide behind them while I took off my clothes.  Large sliding glass doors led into the bath area.

As baths go, it was very nice.  The soaking tub was very large, the width of the room, with a contoured front.  Sentos are known for large murals on the back wall, above the soaking tub--this one had a view of Mt. Fuji, a very common subject for bath houses.  And, this establishment had large rocks/boulders worked into the tub, so you could lean against a warm rock to relax.

But first, get clean.  There were rows of shower heads, but at waist height, intended to be used while sitting.  There were tiny stools and buckets.  Soap and shampoo were the bather's responsibility, although such supplies, as well as razors, pumice stones, washcloths and towels were on sale.  The shower rows also had mirrors, so you could shave sitting down under the shower.  So, I got all clean and headed for the tub.

There is one bathing custom Daniel didn't tell me about.  Most Japanese people take a small towel, about the size of a US dish towel, into the bathing area.  It is used for washing, and then strategically deployed to the most crucial area(s) for modesty when moving around.  I didn't have such a towel with me, but I figured it was like the locker room in high school.  Only wusses worried about such things!  Okay, ready for the hot bath!

But it was really, really hot!  I noticed there was a thermometer on the wall that said 42 degrees C.  (Fahrenheiters, do the calculation!)  Anyway, hot enough to induce a strong blush to the skin.  So, I was sitting on the thick edge of the tub, legs in the hot water, facing the thermometer and looking up at the mural of Mt. Fuji.  I noticed a sliding door next to the thermometer, and I noticed it was sliding open.  There was the woman from the entrance desk!!  She pretended to be checking the temperature, but she took a certain amount of time directing her gaze to the thermometer, giving her plenty of time to check me out!  Well, a lot of Japanese are curious about such things, it's true.  I probably did not live up to her stereotype of westerners...sigh.  But I had my first experience of relaxed Japanese attitudes toward nudity--sometimes there is some mixing of the sexes, in varying degrees.  More about that later!

The photo shows a traditional style bath house--you may be able to see the craftsmanship in the construction.  This is called Akebono no Yu in the Asakusa area.  A cold drink from the machine is very refreshing after a hot dip.  This place is also notable for the extensive planting--is it wistaria?

Also, check here for photos of a typical bath house interior, complete with Mt Fuji on the back wall--in tile instead of paint.  You can also see the sit-down shower heads, each with its own mirror.

This blog has good info on hot springs and sentos, even some about overseas destinations! 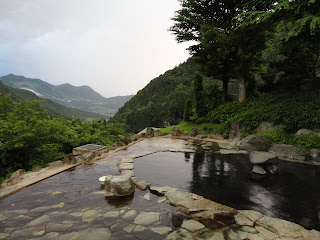 Japanese onsen (hot springs) are becoming well known outside of Japan.  There are lots of hot springs, because the Japanese archipelago is situated in an area of high volcanic activity.  It is said that you can find a source of hot spring water just about anywhere, if you drill deep enough.  In the old days, it is said that people would follow wounded animals, who were able to find natural hot springs which could help heal their injuries.  Later, more hot spring resorts were opened up as drilling technology developed, and resorts began to attract leisure travellers.

My first hot spring experience was deep in the woods.  I had not been in Japan too long, but one of my new friends suggested going on a trip.  He was not too specific about where we were going.  I had an international driver's license (these are only good for one year, so I had not been in Japan very long at that point), so my friend said, 'We can go to my brother's place in Tochigi prefecture, and borrow his car to go on a trip!'  In the US, a driver's license is considered a birthright, almost, but in Japan, they are considerably more difficult to get (usually they require maybe 30 hours (?) of class and a big fee for the test as well, and almost no one passes the first time).  So I agreed to this plan.  The car was fairly heavy, with no power steering, stick shift, and I was not used to driving on the left, so it was a bit difficult.  Then, we headed into the mountains and started driving upriver in a narrow valley.  The road was curvy and narrow.  Meeting a car coming in the opposite directions usually required some maneuvering.  No guard rails, and I think I remember rolling down the window to look our and make sure I wouldn't drop a wheel over the edge.  Anyway, some hours passed in this way, with no help on the driving (other than navigating).  At a clearing in the woods, there was a parking lot.  My friend said 'We have to park here and walk about two hours in the woods.'  I still didn't really know where we were headed, but there was no turning back.  The walk was very peaceful, in a forest dominated by maple trees that were reaching the peak of autumnal redness.  Finally, we arrived at a very simple wooden inn in the woods.  The rooms were Japanese style, with tatami mats, and they were fairly dark because the electricity generators would not be turned on until sunset.  Also, no TV, no telephone.  The only entertainment was a 'go' board in the room.  But behind the building, in the maple forest, was a hot bath with steam curling among the branches.  After my tiring drive and walk, this seemed like heaven.  That night, it began to snow, so we enjoyed the hot bath in a snowfall.  The next day, the forest had changed from red to white.  This inn was called Kaniyu, part of the Oku-Kinugawa resort area.  I later found out that in some cases, they will offer guests a lift to the parking area--there is a road for bringing in supplies, etc., but no parking lot.  The meals were very simple, and for an extra fee, fresh tempura made with local mushrooms was available.  Also, there was no heat, but a kerosene space heater could be rented.   The outdoor bath was gender-mixed, but there were no other guests in the place that day.  There were also gender-segregated baths inside.

Since that time, the area has been more completely developed.  The Kaniyu inn is now a four-story concrete building, with more extensive outdoor soaking facilities.  I haven't been there for many years, but apparently many guests still make the long walk through the woods as part of the experience.

I was reminded of this experience when I found this haiku by Masaoka Shiki:

山の湯や裸の上に天の川 'At a hot spring in the mountains, above the naked bathers, the Milky Way' (translation by me!)

I remember the steam rising into the night sky, and how it would seem to blend right into the Milky Way (although it was not clear enough to see it that night).  I like the shift of scale from the hot bath under your chin, up to the glowing galactic expanse.

The photo at the top shows a public hot spring (no inn) in Nagano prefecture.