The temple Jinguji in Matsumoto

I had the privilege of visiting this temple, participating in ceremonies there, as well as performing in some concerts.  Records of the founding of the temple no longer exist, but it was a Shingon temple at one time.  Now it is in the Myoshinji branch of the Rinzai Zen tradition.  There are some rather old images and structures, and it is certainly very scenic.  However, the temple's chief priest is certainly one of its biggest assets.


The temple is located in the Asama Onsen area near Matsumoto in Nagano prefecture.  The onsen (hot spring) zone is rather quiet these days--once it was quite lively, with a geisha community as one of the attractions.  Now it is mostly quiet but classy inns that are proud of their bathing facilities.

There are many temples with the name Jinguji, since the name refers to a certain movement to establish Buddhist temples (ji) joined with 'Shinto' shrines (jingu).  But that was a long time ago.  There is still a shrine near the temple, but otherwise, the temple has nothing 'jingu-ish' about it.


The chief priest, Rev Takahashi (usually called 'Jin-san') is devout, open-minded, innovative and especially devoted to nuclear accident-related causes.  Right after the nuclear accident in Chernobyl, he visited that area some 30 times to assist with aid efforts.  He is now working to aid victims and improve government response and regulations after the Fukushima tsunami/nuclear accident.

In addition to all that, he has a congregation (danka) to care for.  I saw him in action over the weekend.  The main hall of the temple is in the style of a high-class mansion of the old days--in the past, devout nobles would convert their mansions into temples, meaning that the space is usually large, covered with tatami mats, but the ceiling is of a height more suitable for residential use.  The altar in the main hall of Jinguji is dedicated to Shakyamuni.  It is beautiful, but the space not really suited to the needs of the large congregation--more people want to sit in chairs these days, rather than on the matted floor, for one thing.  So Jin-san decided to build a multi-purpose hall.  This was where the events I participated in were held.  The building is pretty much like a school multi-purpose room, except that there are about 35 niches with altars built into the side walls.  They are all identical black shrines with gilded statues inside, so the atmosphere is definitely Buddhist.


This hall holds up to 300, and we did the same ceremony/event three times, so the total attendance might have been nearly 1000.  The concept was a combined service of the 'Hana Matsuri' (celebration of the birth of Shakyamuni, usually observed on April 8, but a few days later in this case), plus a remembrance of all who passed away in the past year, as well as victims of the Fukushima disaster and the Kobe earthquake.  Two other musicians and I were asked to participate.  The stage setting was simple, but with several large flower arrangements.  There was a crystal basin on a plexiglass stand, with the typical baby Shakyamuni statue (he is standing and waving his hand, able to walk and talk at birth).  The basin is filled with a kind of herbal tea 'amacha' which is poured over the statue with small ladles.  This was set up in front of a projection screen.  The service started with beautiful photos of cherry blossoms (just in season in Matsumoto), accompanied by tsuzumi sounds.  Then, a narrator started to relate the life of Shakyamuni, as Mr. Mikio Tsuji accompanied on his 11-string alto guitar.  Next, the chief priest of another temple did a 'goeika,' a kind of hymn.  She accompanied herself with a small bell and tiny gong.  Then, Jin-san entered and symbolically poured amacha over the Shakyamuni statue.  Next, he did three formal prostrations after first unfolding a ceremonial kneeling cloth.  Then, he dropped some 'shoko' incense chips in his censer and started to recite the Heart Sutra.  He has a very unusual way of doing this, with variations in tempo that emphasize certain meanings.  I joined in with tsuzumi--a rather unusual combination, and then Tsuji-san started with the guitar and Mr. Yoshiharu Karino added his flute.  The other chief priest also joined in the recitation, having practiced with Jin-san before.


Finally, the 'Gyate gyate' section was repeated three times with no accompaniment.  Next was the time for the congregation to offer shoko incense while pictures of the deceased were projected, and Jin-san read the names on the symbolic stupas, the 'otoba.'  The service ended with the usual dedication of merit, 'e ko.'  Part two was a mini-concert by the three musicians.  Then, in part three, a survivor of the Fukushima disaster was introduced for an interview.  She has become an activist for both rehabilitation/recovery and monitoring of government responses. 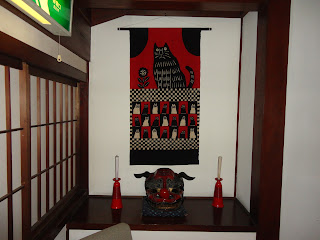 We did the first ceremony on Saturday afternoon.  Then, we went to the 'Kiku no yu' or Chrysanthemum Bath.  It was actually an inn with a bath, and the inns seem to follow this name pattern, always 'The (something) Bath' rather than 'The (something) Inn.'  We had the upstairs dining room reserved, so we left our stuff in the room and went to the ground-level bath.  There was an enclosed garden to enjoy while soaking.  Then we went back upstairs for an incredible multi-course meal.

The next day, we did the program at 10:00 and 2:00.  We finally left Jinguji around 4:30 or 5:00.  Another remarkable thing about Jinguji is that there is a group of Mongolian refugees that work there.  I wasn't able to find out how they ended up at Jinguji, but they were lucky to have Jin-san sponsoring them.  They worked with a crew of younger Japanese, handling parking, ushering during the service, stage operations, sound and lighting as well as setting up the 300 chairs and putting them away afterward.  Mrs. Jin-san was wonderful, kind and soft-spoken.  She gave us amacha herbal tea to drink, and gave us boxes of pastries to take home.   And to think, they actually paid me to do this.