The temple Gokokuji
I first visited Gokokuji (mountain name: Shinreizan) six or eight years ago.  I was just finding out about esoteric Buddhism (called mikkyo in Japanese) and I didn't know there was esoteric Buddhism in Japan.  But there was a Tibet festival at the temple, so I went for a look.  There was an outdoor goma, or fire ceremony, conducted by the leader of the visiting Tibetan group.  There was a sand mandala, which I saw being created.  For the occasion, the temple opened the main altar, which is normally kept closed.  The image inside the altar is an example of a hibutsu, an image that is not normally shown to the public.  Well, I thought it might be cool to see something that is not normally shown to the public, so I went into the main hall.  However, my memories of that visit are pretty vague--I think I was still influenced by my experiences in a very exclusivist Nichiren-based organization that discouraged visiting temples of other sects.  The image in the altar is Nyoirin Kannon, which I had never heard of at that time.  However, I remember that the statue was rather dynamic, with head tilted, seated with one knee up, a rather sensuous pose compared to most Buddha statues.

I recently visited the temple again, finding out a lot more interesting information.  The temple was founded in 1681 and the main hall is pretty much as it was when originally constructed in 1697.  It was founded by Keshoin, who was the mother of the shogun Tokugawa Tsunayoshi.  Keshoin dedicated the temple to the memory of her deceased son.  The interior of the hall is richly decorated, although much of it is darkened by time as well as the smoke from incense and candles.  Nyoirin Kannon is a form of Kannon that embodies both motherly love and invincible power against negativity.  There are around 33 different forms of the Bodhisattva Kannon--the 1000-arm one is well-known, the 11-headed one is very common, but Nyoirin Kannon is a bit unusual, in my experience. 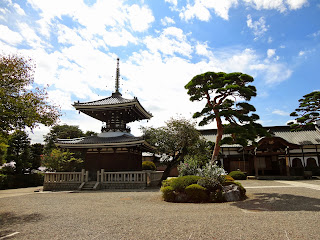 I took my temple stamp album into the main hall.  The monk in charge did the calligraphy while I looked around the main hall.  There are lots of very old statues, and there was also a modern-looking oil painting of Kannon riding on a dragon.  After giving me the temple stamp, the monk told me a few things about the temple's history.  There is a group of statues on either side of the main altar, which the monk explained, are all the forms of Kannon.  These statues were commissioned by Keshoin after the death of her son, when she signaled the end of her worldly life by cutting her hair.  Some of her hair was put inside each of the statues.  These were dedicated in the hope that her son would soon reach enlightenment.  Motherly love!


Other notable features of the temple include the treasure tower (29th c.) and a guest reception house that was moved from the famous temple Miidera in Shiga Prefecture. Also, there is a gate with the inscription 'Fu Ro' meaning 'no old age.'  The inscription is in the handwriting of the shogun Ietatsu.  The temple is easy to find; there is a subway station named Gokokuji, and the relevant exit brings you out right in front of the Nio Gate.  Also, the altar of Nyoirin Kannon is opened on the 18th of every month.  The altar is opened during the sutra recitation starting at 9:00 AM, open to the public.  A free brochure has information about the temple in English 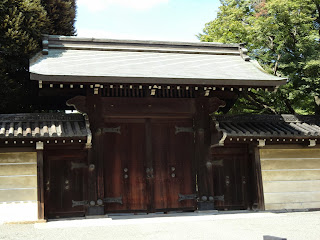